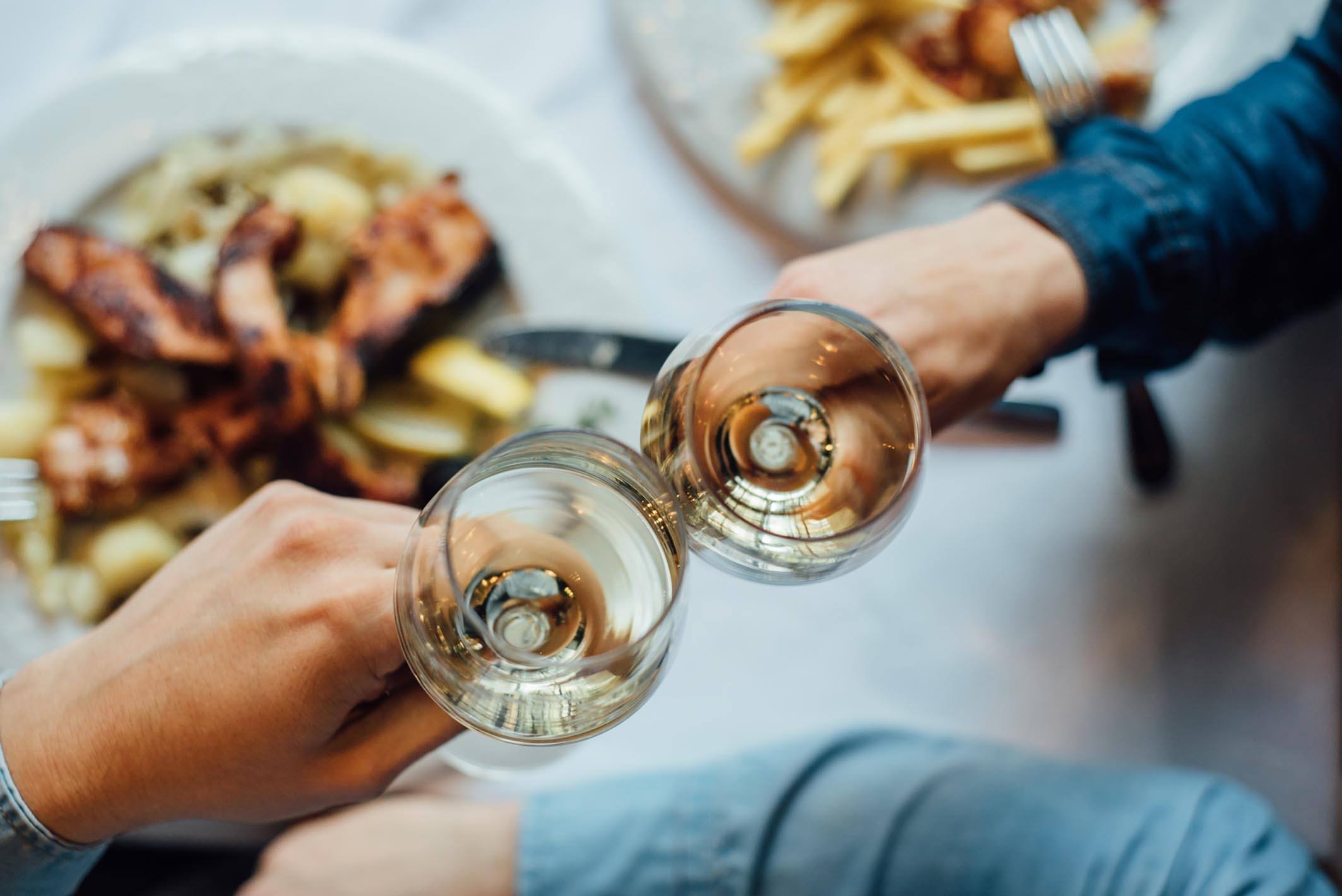 Where to Eat and Drink During TIFF

TIFF is back, baby! From September 8 to 18, the famed Toronto International Film Festival returns and the city becomes host to movie madness, prestigious premieres, internationally acclaimed actors and star-studded special events. As Toronto’s entertainment district buzzes with excitement, both movie buffs and cinema newbies alike begin their hunt for the city’s best spots to grab a bite between screenings or sip a cocktail while celeb-spotting.

The return to a full-scale in-person festival takes place after two years of virtual events, offering even more reason to get in on the action as movies, panels and brand activations pop up across the city. For those looking for the perfect place to drink and dine during the renowned 10-day stretch, we’ve rounded up the top spots for every occasion, all conveniently near TIFF’s chosen venues. Grab your tickets, passes and popcorn… TIFF, here we come!

TIFF Bell Lightbox, the central hub of the entire festival, is home to two must-try restaurants. Stop by Luma on the second floor for a pre-show dinner and enjoy fresh fish and seafood, quality meats and seasonal vegetables in the warm and inviting dining room, or grab a drink in the lounge overlooking King Street West for an aerial view of the action before your screening of The Whale or The Woman King.

Speaking of drinks, you don’t want to miss LUMA’s ‘Magic Hour’ — extended for TIFF! From Monday through Sunday, indulge in $10 rotating drink features from 2:00pm to 5:00pm and again from 7:30pm to close. One of the best happy hours in the city, the cocktails are inspired by some of the festival’s most buzz-worthy films, including the David Bowie documentary Moonage Daydream, On the Come Up, and Spielberg’s The Fabelmans. A beverage to match your movie? We’re in! 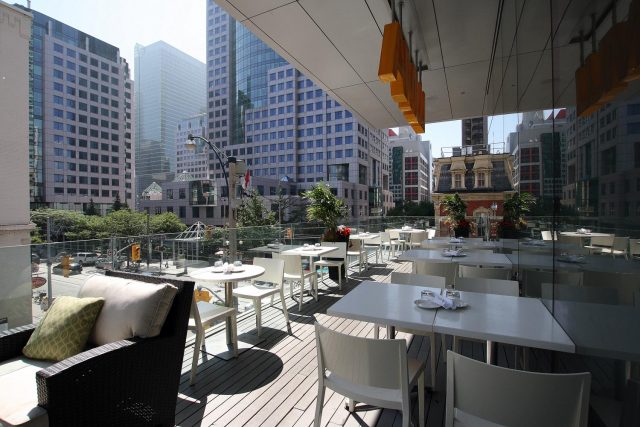 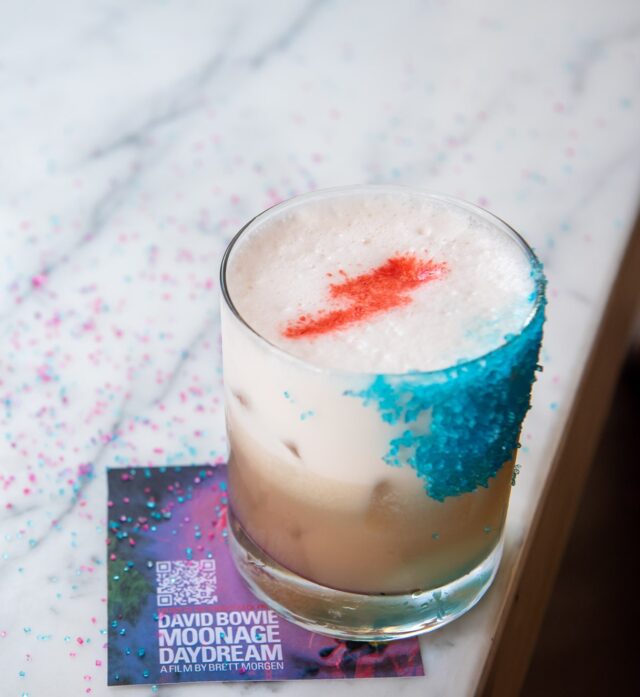 In the mood for something casual, fresh and tasty? In a rush and need to grab something you can easily take on the go? Canteen, the TIFF Bell Lightbox’s street-level restaurant, offers an airy dining room and wrap-around patio on one of the city’s busiest and buzziest corners. (As an added bonus, from September 8–18, King Street transforms into a pedestrian paradise, closing to cars from Peter Street to University Ave!). Try its TIFF-inspired cocktails, hearty salads, housemade sandwiches, oven-baked pizzas and plenty of plant-based options within a stone’s throw of movie venues like the Visa Screening Room at the Princess of Wales Theatre, Roy Thomson Hall and the Royal Alexandra Theatre.

Plus, from 5:00pm to 8:00pm, enjoy a starring lineup of drink deals on beer, wine, seltzers and bar rail from $5 to $8. While you’re in the area, keep an eye out for crowds, tinted windows and black SUVs … you might just catch a glimpse of some of the biggest names in Hollywood rumoured to be making their way to The Six, including Oprah, Anya Taylor-Joy, Harry Styles, Viola Davis and Taylor Swift. 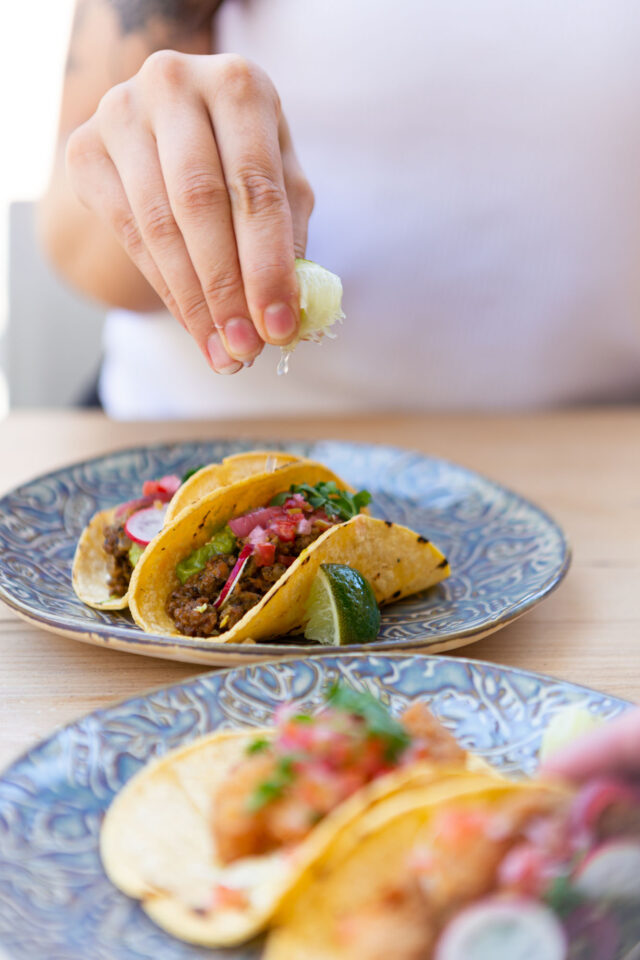 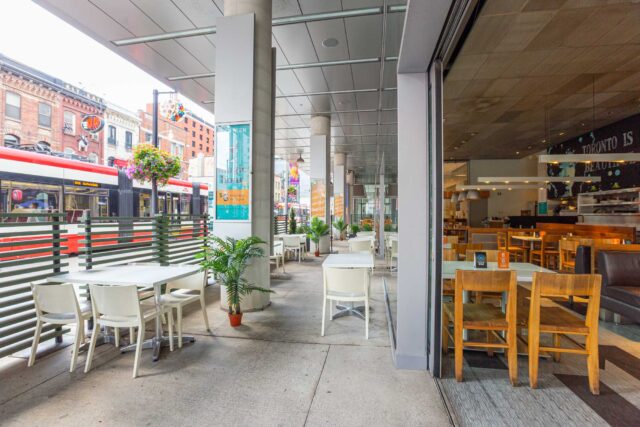 Getting dressed up for a red carpet premiere? Reserve a table at Canoe, Toronto’s iconic 54th floor establishment for haute cuisine, ranked among the top 10 restaurants in the nation according to Canada’s 100 Best. Try the tasting menu for one of Toronto’s best dining experiences (complete with wine pairings) or sip on a handcrafted beverage at the bar and take in one of the city’s best views. 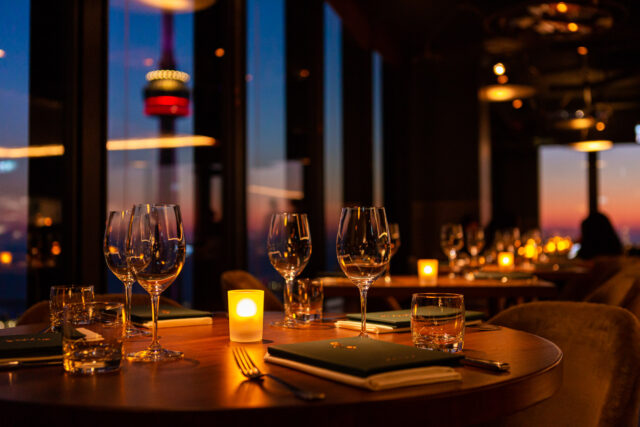 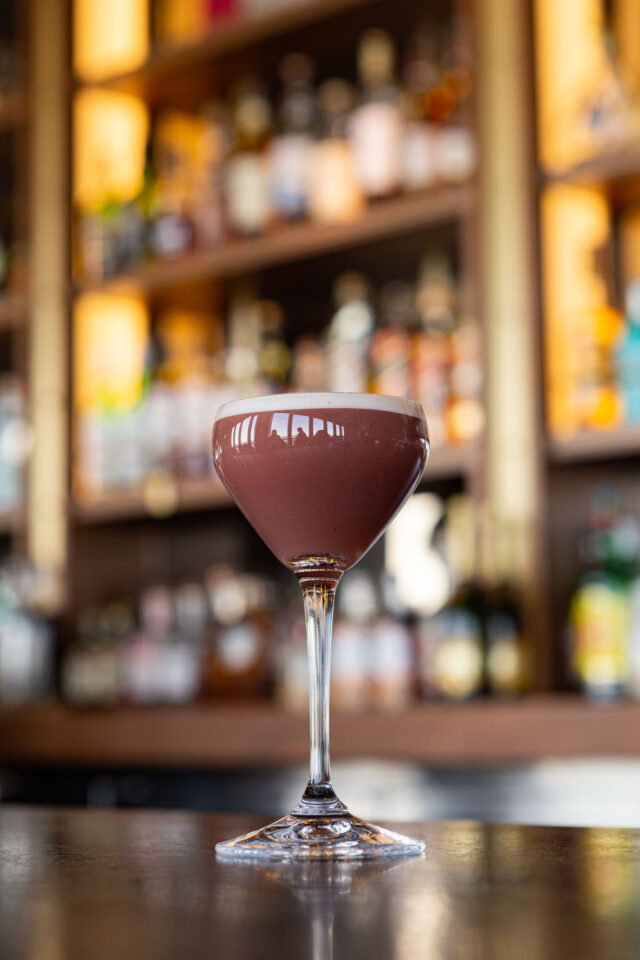 Just east of ‘festival street’ in the Financial District lies The Rabbit Hole, a wild and whimsical gastropub serving up bold, British flavours as well as cocktails, wine and craft beer. Stop by ahead of catching Glass Onion: A Knives Out Mystery, Devotion or The Menu. Visiting with friends? Try the Team Tipples, bottled cocktails designed for groups to share, or enjoy Happy Hour specials every day from 3:00pm to 6:00pm. Plus, soak in Toronto’s last stretch of summer on the large, triple-tiered patio. 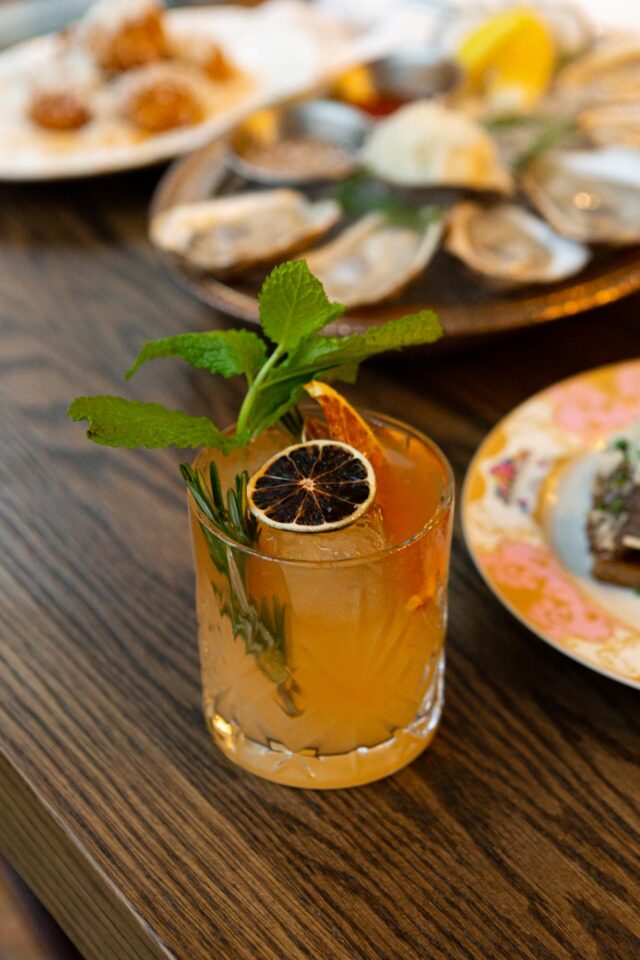 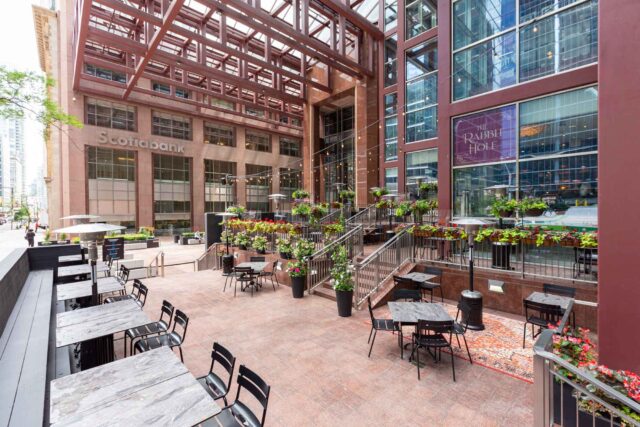 Amidst the film frenzy, find a moment of retreat at Jump and take in its legendary sky-high glass atrium, hidden-gem courtyard patio, and bustling wrap-around bar. Serving honest, fresh and flavourful cuisine and a robust selection of spirit-forward cocktails, stop in midday and enjoy the $26 lunch combo featuring a daily inspired sandwich and soup or salad from 12:00pm to 3:00pm. After that, it’s happy hour with drink specials from 2:00pm to 6:00pm. This timeless Toronto treasure is a buzzing escape in the city’s downtown core. 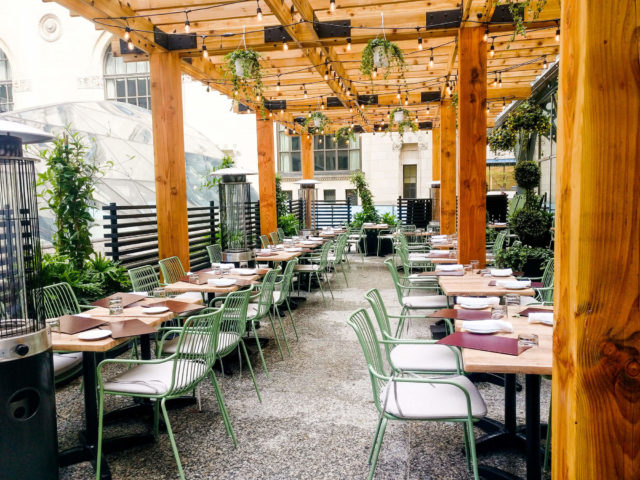 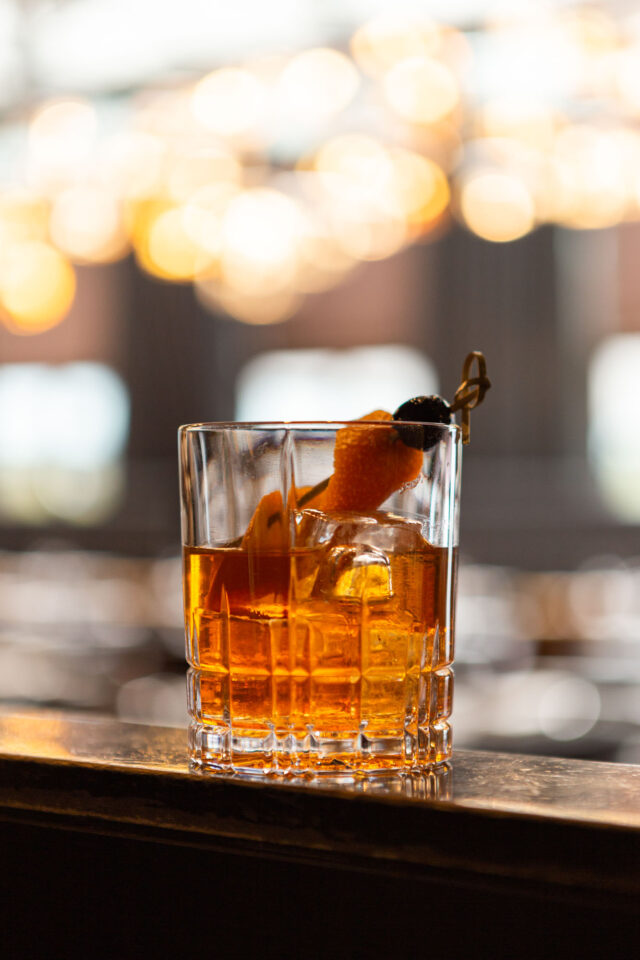 While it’s not an official TIFF venue, the Cinesphere IMAX Theatre is also screening Moonage Daydream, one of TIFF’s most talked-about films, a short jaunt from Liberty Commons at Big Rock Brewery — the perfect spot for a pre-show pint and bite. A proper Canadian brewpub serving up farm-to-table cooking and craft beer, the Liberty Village hot spot offers one of the best patios in the area and slings drink deals from 3:00pm to 6:00pm daily. 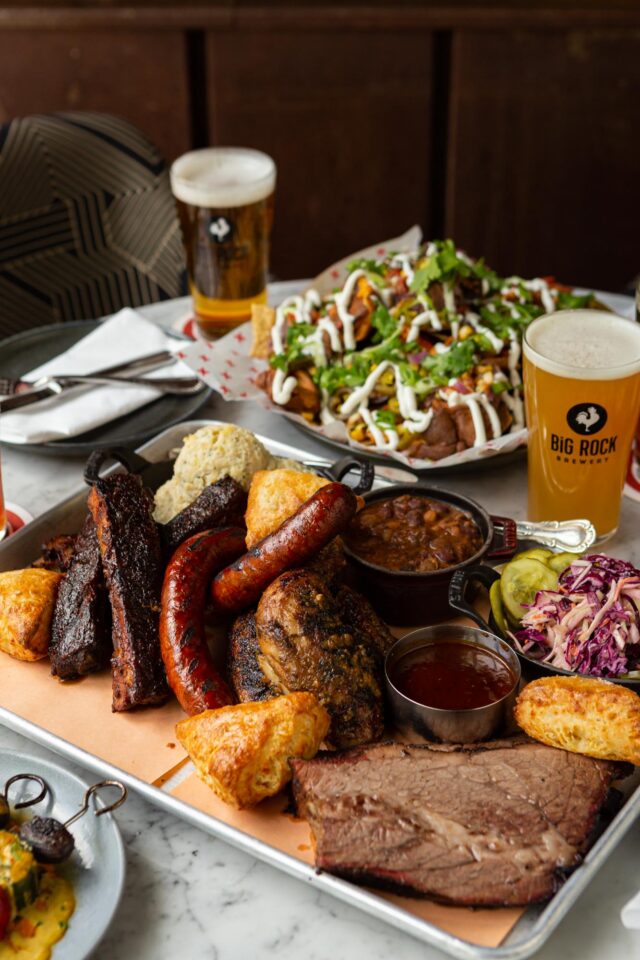 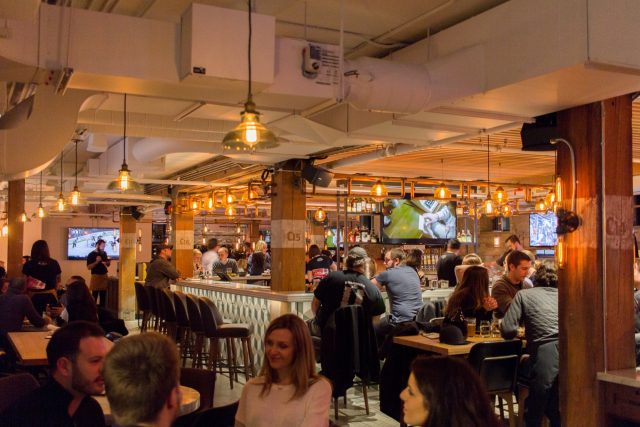 From grab and go options to elevated pub fare and even fancy fine dining options, no matter how you do TIFF, there’s something for every movie-lover and action-seeker. Join us in saying goodbye to the online-only screenings of the past couple years and hello to the 10-day dose of glamour and excitement as TIFF’s 47th year gets underway.